Here we are mid September.  Where did the summer go?  This time of year I can barely keep up with the produce coming out of my garden.  I confess to a huge pile of zucchini and patty pan sitting on the counter and a big bag of beans in the fridge; waiting patiently to be dealt with.  So pretty though, right?! 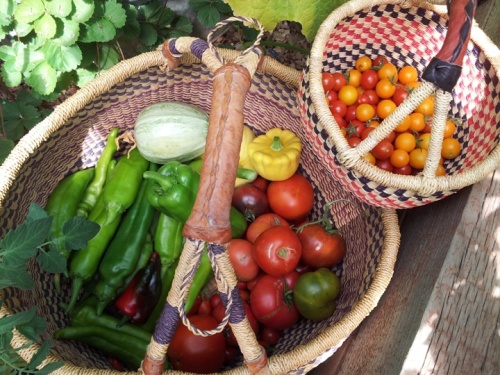 Needless to say, I’ve been busy.  Tomatoes, including cherry tomatoes, are washed and frozen to make sauce later as soon as they are picked.  I have kept up (sort of) with basil; already making pesto for the winter.

I’ve already canned a batch of Dilly Beans with some of the beans and made a few batches of hummus.

Peppers have been the star of my garden this year. I’ve made stuffed peppers a couple of times, and have otherwise kept up with them by leaving them in the garden until  need them. 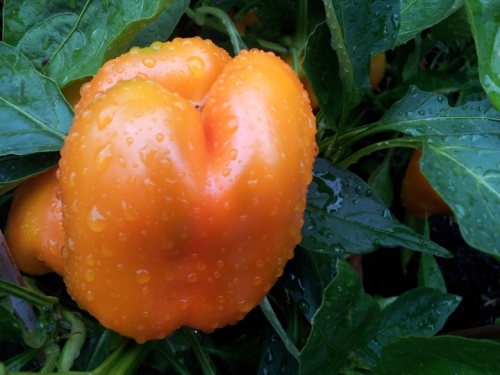 Buttercups are starting to size up; I picked the first one last weekend.  They’ll keep for a bit, hopefully well after fall becomes winter. 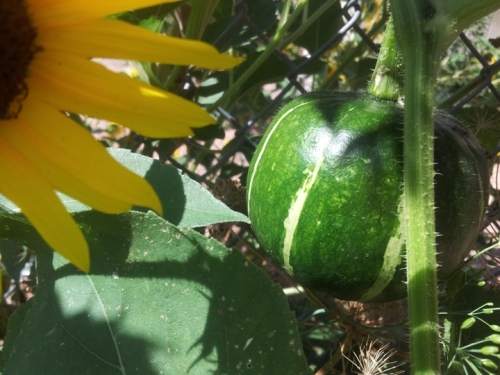 Thankfully, I’m staying ahead of squash bugs and horn worms, but a couple of my tomatoes caught a virus this year, cutting back my overall production there.  One was a Mortgage Lifter, the other a Cherokee Purple–both heirlooms and therefore a bit more susceptible to such things.  The fava bean experiment has ended.  Even after the construction of a shade structure and hand watering, they weren’t happy, refused to set and got black on the edges.  I admitted defeat and pulled them out.  My potatoes died back, so they’ve been dug as well, with a much happier outcome than the poor little favas!

I’m alternately dreading the impending frost (Still have lots of green tomatoes!) and kind of looking forward to it (kinda ready to be finished with the “putting up” part, what AM I going to do with all this squash?!).  I know I’ll miss having fresh veggies anytime I want them.  But, everything that gets canned and frozen now will bring happy memories and flavors of warmer days when the snow flies.  Fingers crossed for a late frost.  🙂

Bring on the Heat